PHOTOMEDIATIONS: A CALL FOR CREATIVE WORKS

Between Sept 2015 and March 2016, the creators of Photomediations: An Open Book challenged image creators from around the world to draw from the Europeana repository of cultural artefacts and create still and moving image mashups, collages, montages, tributes and pastiches to submit to the Photomediations creative works competition; a celebration of open practice and creativity.

Participants shared their open licensed images online, in the process making them available to be reused by other members of the Photomediations community. Their work was viewed and considered by the project team and a panel of international guest judges, Katrina Sluis (The Photographers Gallery), Karen Newman (Birmingham Open Media), and Pippa Milne (Centre for Contemporary Photography). 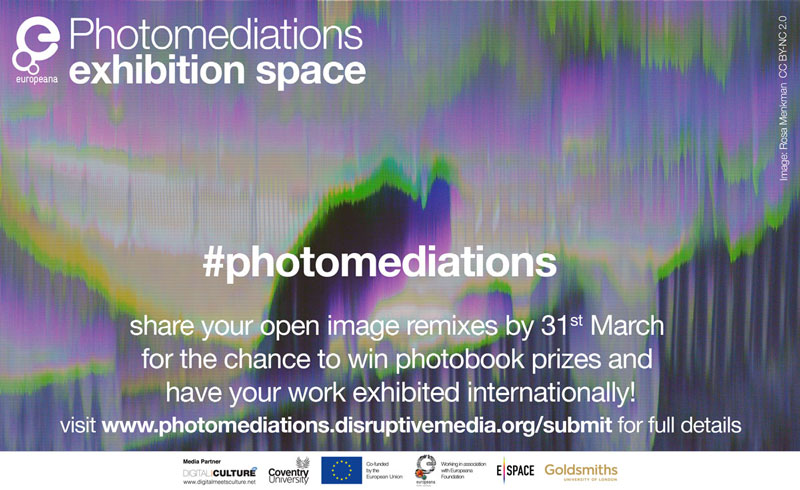 The call received a fantastic international response with the submitted works reflecting both the nuances of the original works and very clearly, the diverse cultural origins of their ‘new’ creators. After much deliberation, in June 2016 the Photomediations team and guest curators proudly announced their overall winner, curators choices and commendations for the Photomediations open call with the following press release.

We would first of all like to thank everyone one who contributed work. The sheer quality, diversity and creativity evident in each submission made the judging process hugely satisfying for us but equally challenging to agree on our final selections. Every qualifying (licensed & attributed) image submitted to the call will be showcased here on the Photomediations website and we hope will continue to inspire & provide the foundations for others to produce new remix creations and showcase the benefits of open licensing within the creative sector.

Therefore we are pleased to announce the winners:

“By deftly selecting and splicing together two remarkably different images, Mark asks us to imaginatively ponder the physical impossibility of a “storm in a teacup””(Katrina Sluis)

Wioleta Kaminska, I Miss My Home (CC BY)

“An ambitious and poetic combining of images and text, motion graphics – which explores what might be the visual language of a photograph on a screen… the submission has resonance with contemporary events in Europe.” (Katrina Sluis)

“In the tradition of other artists such as Andreas Müller-Pohle, Constantin has playfully explored the remediation and materiality of historical photographs in contemporary screen culture with the assistance of a Game Boy camera.” (Katrina Sluis)

“The humour that Elle has co-opted here is witty and subtly layered. Her use of a 19th century muscle man, placed on top of a scene that brings to mind Baywatch while giffing through the colours of the gay pride flag gives viewers a lot to interpret.” (Pippa Milne)

The new Photomediations exhibition space will be live in time for its launch at the ‘Cultural Heritage: reuse, remake and reimagine’ conference in Berlin.

You might also be interested in the next stage of our project; the development of a set of open-source creative challenge cards that will feature selected Photomediations image submissions throughout the pack – fully attributed of course! The idea behind these is to build upon the creative jam sessions that we ran across Europe and Australia and offer these as tool to use within a classroom or group community setting to stimulate further exploration of open creative practice.

Once again, thanks so much for taking part in the Photomediations project!